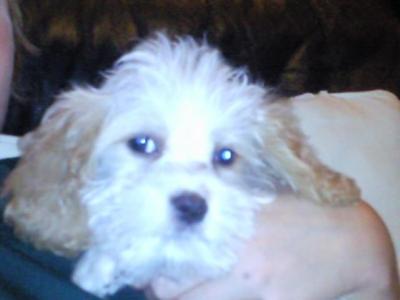 Django, our Maltese Cavalier King Charles Spaniel mix is now 14 weeks old and we specially chose him due to a lack of fences at our house, our 5 kids, our 12 year old Labrador but especially for our 3 year old son who has wanted a puppy for so long. I love to hear the fits of giggles when Django finally catches him when they play chase around the house.

So far Django is almost completely toilet trained, can fetch a stick and answers to his name. He is so affectionate and fun. We are really happy to have our Cavamalt Django as part of our family.

Join in and write your own page! It's easy to do. How? Simply click here to return to Tell Us About Your Cavamalt!. 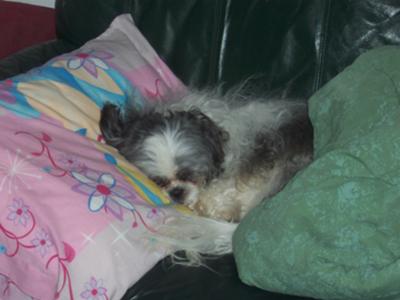 My Maltalier, or Maltese Cavalier King Charles Spaniel mix, is a boy named Disco. He loves to stand on his hind legs and wave his arms back and forth or walk backwards on his hind legs. We call it dancing and the moon walk.

He has long hair and has a lot of energy. The day after you go on a long walk, you'll do what you want to, he'll spend the day sleeping. Most of his stuffed animals have no eyes because he ripped them out. But, he is cute. 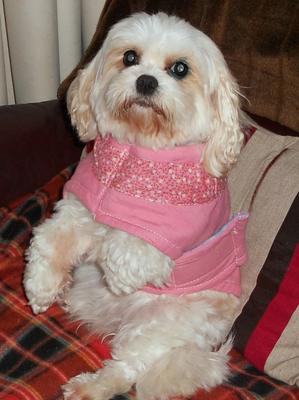 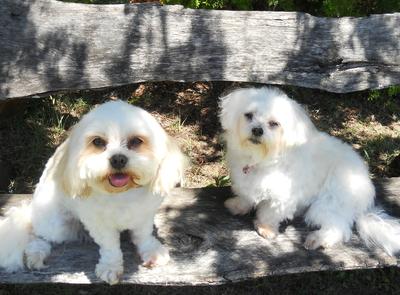 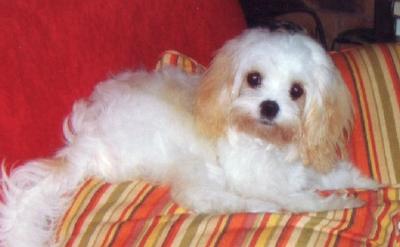 Belle our Maltese King Charles mix is 5 yrs old now. We got her as our "Backup companion" for we have a full bred Maltese named Tina, she was very sick 5 yrs ago and though we would have to have her put down so we decided to get Belle a puppy then . Believe it or not Tina found a new lease of life . She is till with us and is 13 yrs old now.

Belle is the most beautiful companion, her temprement is so affectionate, She is very intelegient and knows when animal shows come on the TV by the sounds of the different shows and she comes in and sits down and watches it. Amazing I have never seen that before.
She loves children but does get a bit frightened if they start to run around and making too much noise.

She is tan and white in colour her mother is a Tan King Charles and her father Maltese.

We do have to keep her clipped as her coat is very thick. She is very pretty and does not shed much hair at all, which is wonderful as they are inside most times she does love to go outside and just be by herself and look around then lets us know when she wants to come back inside.
She is very close to Tina as I think that bond was established when we got her as a puppy.

I would recomend the Maltese King Charles mix bred to anyone.

Dexter is a 10 month old Maltese Cavalier King Charles puppy. He is mostly white with reddish orange coming in more and more. He is a wonderful little dog. We have a 10 year old Shih Tzu Sabre female who is as docile and loving as can be. He is quickly learning from her what is expected of him in our family. He is playful, loves the park, and has been very easy to train. Sabre is the perfect dog so I was resistant to the getting another dog.

I LOVE him, he has adapted to our family so quickly. He loves to chase butterflies, moths anything little that moves. Several nights ago we were out walking in a large grassy area and he was chasing Fire Flies- he caught one and it appeared that he had a glowing nose. He is a great family dog loved by all. Our Maltese Cavalier King Charles Spaniel mix does have a shoe fetish- not that he chews on them he just picks them up and carries them around and collects as many as he can. Funny, fun little dog with dread locks... 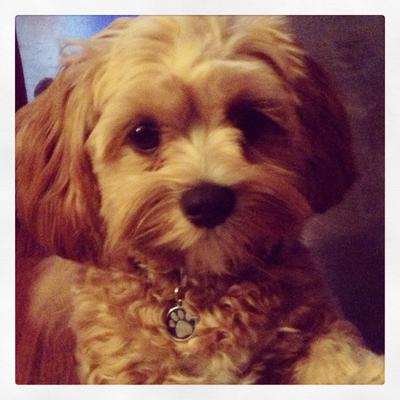 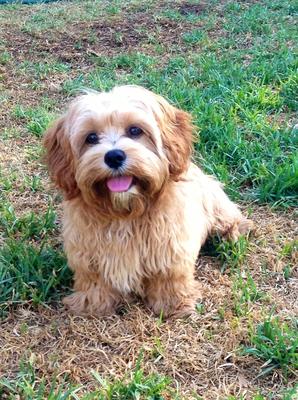 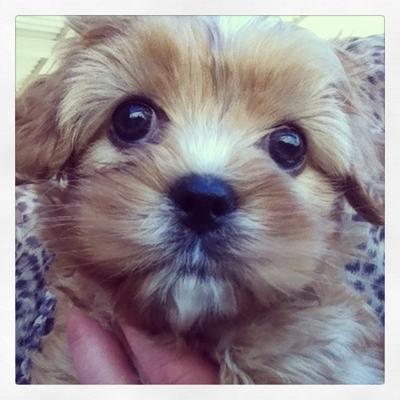 Oscar is a 10 month old Maltese King Charles Spaniel mix. For the last 8 months since I've had him have been the best. Oscar was socialized with other dogs,kids and adults from a puppy, which has definitely helped when taken for walks and visiting family and friends, he is so friendly, very intelligent and very easy to train.
Loves the beach and the water, no fuss bathing him either. Oscar does not matte at all.

I have so many people stop and ask what sort of breed he is, he has also converted pure bred owners!

My Maltese King Charles Spaniel mix is a beautiful companion!

My beautiful Maltese Cavalier King Charles Spaniel mix Bunny, she is gorgeous, a bundle of love and affection and joy. She's adorable ball of white fluff with soft lemon markings on her ears. She has a Maltese dark eyes and nose, facially more like a Maltese than a Cavalier. Her eyes are small and cute balanced by same size nose with so much long soft white fur. She's adorable!

As a puppy she was like a little white rabbit, and 'hopped' around, so tiny so gorgeous hence her name Bunny.

Her personality is so loving and affectionate, incredibly intelligent, just have to look at her and point sometimes without saying and she runs and does whatever. She's so sensitive too, knows exactly how I'm feeling and is there in a second on my lap if she senses I'm upset in any way.

She's great fun and loves fun and games.....bring home from a shopping a carrier bag and invite her to look and shes in that bag...looking sniffing and taking out her 'toy' playing in front of me instantly... she's a dream!

Bunny is almost five years old. She's like an adorable pup, so full of life. I love my Maltese Cavalier mix with all my heart. She's a heartbeat next to me... through troubled times as well as joyful times.

I love her so much.

Join in and write your own page! It's easy to do. How? Simply click here to return to Tell Us About Your Cavamalt!.