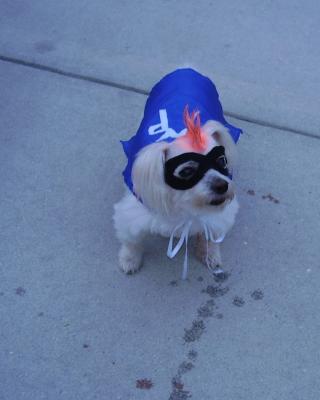 Cosmo is our oldest of 5 Maltese! He is 13 years YOUNG and I say that because, he still acts like he did when he was much younger. Always coming up with something new like totally rolling the house in Toilet Paper when we leave him home or sneaking food off your plate when you aren't looking.

I remember one Christmas morning, I got up early and made fresh baked cinnamon rolls for us to eat while opening our gifts and I set the plate down on the coffee table as we all got settled in to start opening presents. I had the camera in hand to take the first picture of a present being opened and I looked over to the plate and caught Cosmo gently and quietly stealing a WHOLE roll off the plate and yes I got the photo of it!!

Cosmo is a total "Cut Up" and Big Camera Ham! I only wish I could have included more than one picture of him because, his personality and facial expressions make him so photo genetic. Cosmo has no problem wearing sunglasses or clothes especially when is gets cooler. He is laid back and easy going until………its time to eat!!!!!

He is still a BIG baby (although he is the father to 2 of our other Maltese, one son and one daughter & we also have Cosmo's wife, the mother of his kids, and another beautiful girl we rescued. A total of 5 Maltese. They are our children and get our undivided attention. Other than our 22 yr old son David, we only have our 4 legged children. We do not refer to our babies as Dogs, they are "Puddys".

The "Puddy" reference came about when Cosmo was a baby and some one tried to get his attention and referred to him as "Buddy and "Puppy" at the same time and it came out "PUDDY" ........ which stuck! We now think of all small dogs (especially Maltese) as Puddys now and so do our family and friends.

The picture I have included is of Cosmo this past Halloween 2007. He is dressed as his Alter Ego "The Wonder Puddy"(notice the WP on his cape)! We "Wonder" what he will do next! HA HA! He has had a Mohawk for awhile now and we colored it with that colored Halloween hairspray that washes right out.