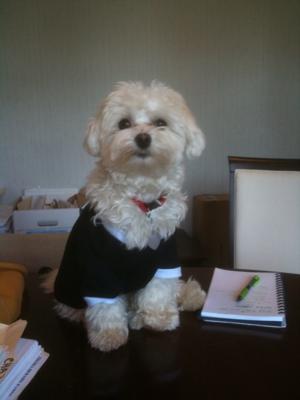 Well I decided I must have a dog and it was going to be a Maltese. My husband was very unsure of a new family member. He was worried it would be too much of a change for our life styles. Two days before I was to pick up our new puppy my husband still did not believe I was going through with it.

I told Fred (my Husband) I wanted him to be involved and would like him to pick out the name for our puppy. The first thing out of his mouth was expensive. We laughed and I said that was much too long so we shorted it to Spencer. We have the best dog ever and after about 1 month with Spencer, Fred said to me that was the best money I ever spent. 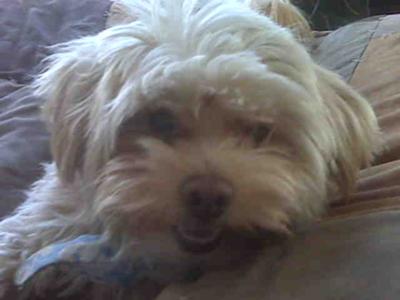 Cubby was named because as a Maltese Shih Tzu mix rescue. He was a little shy, fearful and was hiding when I first met him at a dog adoption. He was under the chair of his first handler at the rescue and would not come out except for me. He still likes "cubbyholes" at home and sleeps in his little canvas doggie condo at night, his own personal Cubbyhole.

Cubby is a cuddley, friendly and sweet boy and is well-adjusted, along with his brother Anderson Riley a Wheaten Terrier Poodle mix. 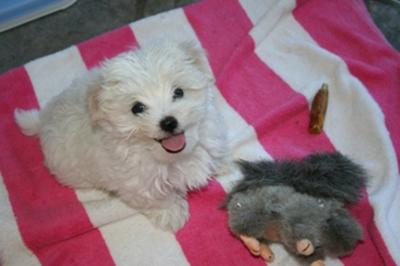 I named my Maltese puppy a very rare dog name. A Sigil is a sacred symbol with meaning, magic, and protection. Sigil the puppy is pure Magic!

Also, Amy Sigil is a favorite bellydancer and inspiration, and we named our puppy after her as an artistic tribute! Amy Sigil wants to "eat him for breakfast" because he's so adorable... and magical, of course! Our 14 year old terrier also knows the name is magic, because when we say "Sigil!!" treats always appear!

He also wants to protect us (by growling with Maltese menace... grrrrrr) from anything and everything odd in the neigborhood, like garbage trucks, birds, and neighbor dogs... truly a Sigil of Protection!

I had just lost my father-in-law and needed something in my life. I was his sole care taker for a very long time. I had Maltese many years ago and have always loved the breed. My last Maltese was 15 when he passed away. Anyway, I decided to find a new baby. It took me several months to find the right one. I thought for many days to find a cute male dog name. Then it hit me, he was my little rainbow and hence the name Skittles. He is 2yrs and 3months old now and I would'nt know what to do without him. 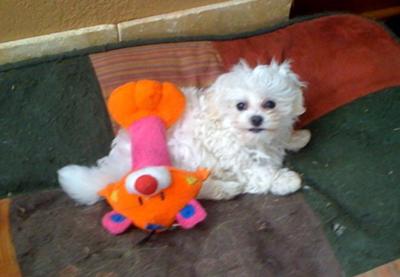 Our Maltese is affectionately known also as Shriek, Swiffer, PeeWee, Mogwai, and The Peebs. It is a bit of an uncommon dog name. We settled on the name Mr. Peabody from the cartoon Rocky and Bullwinkle. Mr. Peabody was an intelligent white cartoon dog who wore poindexter glasses (heavy black rims).

Our Maltese Mr. Peabody, while sporting a hairdo much like Albert Einstein, has a set of dark intelligent eyes and needed a name that gave his diminutive stature a little extra distinction.

I was looking for some good creative dog names and came up with Mica. It is pronounced Meekah from a movie character. Wanted her to be unique.

After looking at several baby name websites I decided to trace the origin of the Maltese and found that they come from a small island called Malta off of the coast of Italy. I began looking at Greek names and found Nicolai and Nico was just perfect for my baby.

Nicolai is a Greek name but the Russian variation is Nikolai, personally I like the spelling with the "k" better but I wanted to stick to his roots... After 3 endless nights of internet searching I decided on Nicolai Zander. 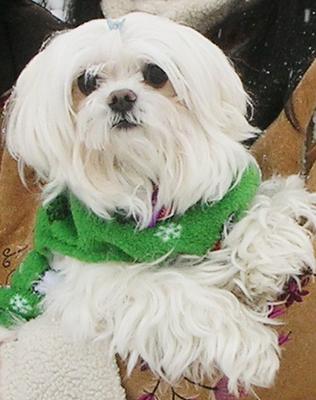 I am a teacher and used to tell my students to use their "beanie copters" when I wanted them to think. With a misunderstanding of the sound of the word, I got the nickname "Beanpop". Well what other name would a momma give her sweet fur baby but Beanpup. 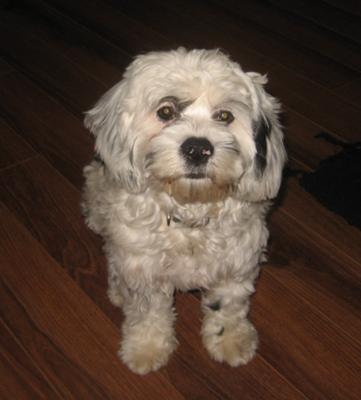 He is so full of energy and fun, that's the twist part. He is also very proud and regal looking, hence the Sir. It kind of sounds like some British dog names. And as for his given name... He just always looked like an Olliver to me. xox 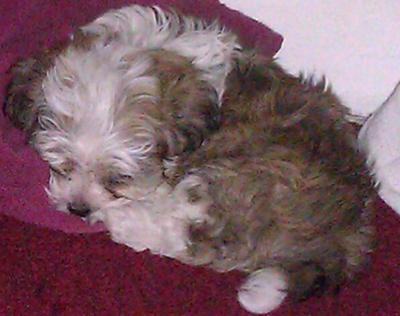 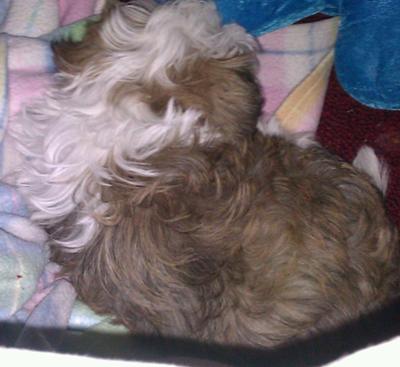 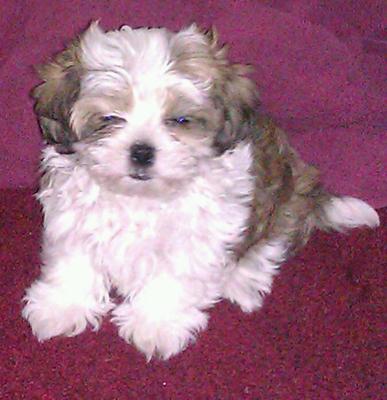 I love my sweet Maltese and so do my four kids. We actually all love chocolate and since our Maltese puppy Twix is like a caramel brown and sweet as the cookie covered Twix we decided on Twix and he seems to enjoy his name to.... My mom helped me choose Twix and were are so happy for him to be apart of our family!

When I decided to get a Maltese I called a friend that breeds them. She said she had a little male that no one wanted because he was so small. So I told everyone I was getting a pocket puppy. I was looking for some small dog names that fit him well. His whole name is Hot Pocket Man.

I named him after his Mom an Dad. Dad was Candy Man and Mom was hot stuff. He's a whopping 5lbs, but he takes on his 2 Schnauzer sisters like he weighed 75lbs.

by Suzin Zovluck
(Pembroke Pines, Fl.SNOUT TO SNOUT, WE LOVE) 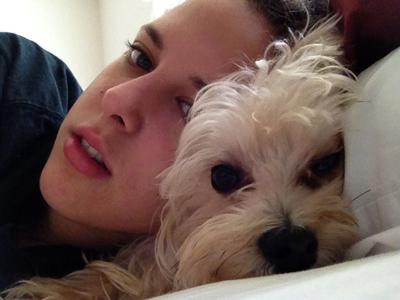 Originally, our decision was to adopt a Maltese. When a sweet little Maltese puppy was brought out, despite our soft cooing and gentle petting she sat, trembling with fear. The owner commented on the breed's docile nature. My daughter asked if she had "anyone with a bit more spunk" and out somersaulted this frenetic bundle of fur! He was literally dancing circles around the Maltese.

Yep, he was a Morkie and in that moment pranced into our hearts. We wanted a BIG name for this little dog. Many years ago the first rollercoaster that both my children rode was called The Montu. What was significant about this, was that they each were extremely afraid of and daunted by an amusement park ride of this magnitude, yet, chose to challenge their fright. (The Montu is also a warrior tribe.) When I suggested the name my daughter immediately knew it belonged to him. Upon telephoning my son who lived out of state he also agreed upon the symbolism. This was 4 years ago.

Montu has become a significant and integral family member. A year ago, suffering from "mommy seperation" ( I was working in the garage,OY!) Montu, in his angst, decided to chew and ingest the fabric that covered our king-sized bed box-spring. Upon vomitting some unfamiliar material fabric I was inexplicably compelled to go into my room and look underneath the bed. I have no doubt this was divine intervention. You can imagine the fear and shock which seized my heart when I noted much of the fabric was missing. Alas, an immediate trip to our vet indicated that Montu was truly a "stuffed" pup. Two surgeries resulted in effort to remove the fabric. We tease that it cost very little to bring him into our lives, but a mere $10,000. to keep him here. It was a terrifying and emotional two weeks. I had the good fortune to not only have the best veternarian surgeons and staff, but, was called by an "animal intuitor" who learned of Montu's ordeal. She offered her belief," Montu is a soul who has waited a long time to come to you in the corporeal and inspite what the vets advise, Montu will heal faster in your arms rather than in the veterinary hospital". Convinced, I called the hospital and begged to take him home promising my diligence 24/7 in re; to medicine and making the hour long trip 4 times a day. They acquiesced, I was granted my wish.Perhaps they felt we'd all be a little safer with a nut like me off the streets!

Within days our beloved Montu the Morkie had both his wag and his swag on! I do not regret one penny that was spent in helping to save our silly bed-eating pup's life. Of course we have sinced dog-proofed our home, and our heart's will never be so. He is our fearless little warrior. A giant ebullient spirit residing in a remarkably delicious and enchanting four-legged body. Some things are meant to be!

I rescue dogs. My county has a 93% kill rate and it drove me nuts. I contacted several rescue groups in large cities and asked if I drove pets to them would they foster and adopt them out. They all said they would be thrilled. So I have been doing that over the past year. I first saw Falcon in the shelter and he was in a pen with 2 other Maltese that came from the same breeder. They were so upset and would run if someone approached them. They were all in the worst shape but Falcon was the worst. He was so matted his legs were fused together and he could not move his head. I fostered him. Once groomed, he never moved and I noted that he did not know he could walk. We got in the yard and I taught him one step at a time...within about 10 minutes he was running...he would look at his rear as if to say...what is going on back there. We next tackled going up stairs but coming down was a lot tougher. I was concerned about housetraining a dog that had lived in a pen his whole life...he had urine stains up to all 4 knees. He loved being praised and housetrained like a dream
He is a prancer and dancer now. I chose Falcon from the Maltese Falcon movie. That and how he just flew high after being rescued. He was adopted by a lovely couple that had lived all over the world as missionaries and had just retired. I am in their will to get him back if they ever can not care for him.

Of course in rescue so many dogs touch my heart but Falcon will always be a very special dog in my life. I am so grateful that I was able to be a small part of his. 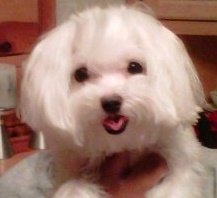 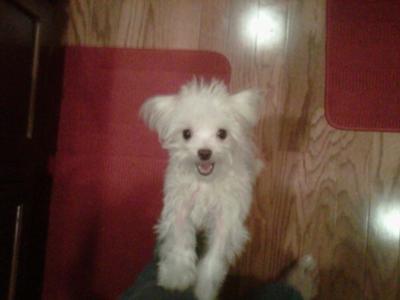 Chowder is a 2 year old full-blooded Maltese. He is small for his age. He is at his adult size and he is only 4.5 pounds. He loves to play with empty toilet paper rolls and loves being around people and children. He is full of energy and loves to run and play back and forth across the floor of our house. He also enjoys rearranging furniture in our living room.