I was looking online for a teacup or micro teacup maltese and came across the site listed above, adorableteacup.com. The cost was 1300.00 marked down to 650.00, it was stated she was the last pup of the litter to be sold. She is 11 weeks. It sort of concerned me with the way the transaction would be handled. The man that I spoke with says that the pup would be sent to me after the monies were sent to him, by using walmart to pay. Usually you as a customer would like the transaction to be guaranteed, they stated that pay pal had security issues and they didnt want to deal with that. Then he was saying that i could send a deposit of 350.00 and that he would send the pup and I would pay him the rest when I got the pup. What guarantee is that for him?

I did not complete the transaction due to the procedure of obtaining a pup from a place in Columbus Ohio which he stated they were. Not to mention a Texas number. In question to you, Have you heard of this breeder, even though he is a small breeder quote unquote from him?

Join other Maltese Maniacs and get our exclusive monthly newsletter, discounts on great Maltese dog products, and notifications of contests and giveaways.

Does your Maltese dress up for Christmas?

If your Maltese is the cutest, most festive dog around then you could win! 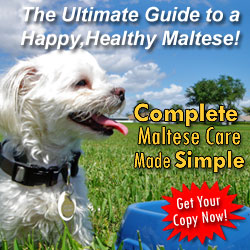