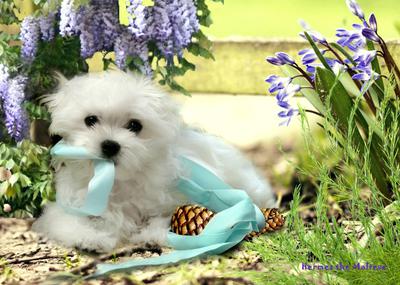 This is my new little boy Hermes.

My husband took me on a long journey to the other side of the country to find him as he thought that he would help ease the pain following the demise of my darling little girl, Snowdrop.

In Greek Mythology, Hermes was a messenger to the gods.

He was quick and cunning and moved freely between the worlds of the mortal and divine, as emissary and messenger of the gods intercessor between mortals and the divine and conductor of souls into the afterlife.

We thought it might be fitting and he could carry Snowdrop’s soul to the afterlife to wait for us. Also of course, Hermes is a well known French Fashion House and both little Hermes parents are of French Pedigree so it is an acknowledgement of that too.

He has indeed helped me a great deal as he needs so much attention and has kept me busy.

My male Maltese puppy is brave and bold, very affectionate and as bright as a button. He seems to have developed a real empathy with me even kissing away my tears when they have, on occasion, leaked out of my eyes when Snowdrop is on my mind.

I think he will be a grand little pet and will be much adored.