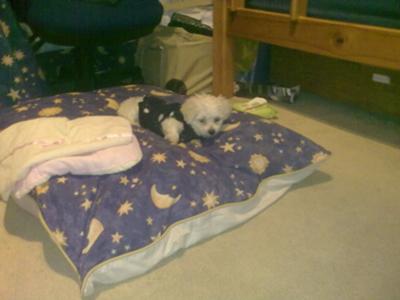 My Maltese Coton du Tulear mix is is 4 months old and is adorable! He loves to chew on fingers and chase the cats. He also always steals peoples shoes and ADORABLY runs off waddling his bum with them. He has the most adorable face and is very loving and affectionate.

He is very smart and loves to play soccer by taking his soft ball and running around the garden pushing it with his head and legs. My Coton du Tulear mix also knows names VERY well, he always listens to soft smooth sounds especially when its a song .

He, like puppies in movies shifts his head to the side when he doesn't understand you. He is very loyal and would never even try running off even in the parks.

I work for a pet store and once in awhile we will get a puppy that comes to us "stressed out" and they will not eat and become hypoglycemic. This is the story of our Maltese Coton de Tulear dog "Tucker".

Tucker came to us at 9 weeks of age and 2.4lbs. He became stressed out and would not eat and became very, very sick. He was going down hill very fast. His weight had dropped down to 1.9 lbs. I took him home Saturday so that I could monitor him and feed him every 2 hours. He was so weak that he could not stand up by himself. My boyfriend and I both got up with him for his feedings and potty trips every couple hours. He even sleeps in bed with us, sheets on and all.

After about 17 hrs of him coming home with me, we were noticing a huge improvement. He could stand up and even walk, still would not drink or eat without us forcing him. After 24 hours, walking, hopping around, drinking by himself but still not eating. Monday morning came and he barked and ran to my boyfriend and we knew that Tucker was ours to keep. Our Maltese Coton de Tulear mix has stole our hearts!

Today is Wednesday our brand new baby is still at 1.9 lbs but last night we had chicken breast for dinner and so did Tucker. That is an amazing feat! Tucker has been enjoying his new life. He follows us everywhere we go, he barks little tiny puppy barks to let us know he wants to play and has been going potty outside. He even had oatmeal for breakfast.

We spoil him rotten because he deserves it as his little life did not start out great but will be from here on out. He has a wonderful personality already and his puppy kisses are the best! Tucker now has a cold so we are working on that. Alot of TLC can go along way:)Keep our little man Tucker in your prayers and I will try and post pics of him as soon as possible. We LOVE our Cotonese!

Tucker, our Maltese Coton du Tulear mix, is back and healthy as ever! Our little 1.9 lb. puppy is now 7.65 lbs. and is full of energy. He is almost 9 mos. old now and enjoys his life to the fullest everday wanting to please us by showing us how much love and affection he has for us.

Here is a little update on our precious Tucker. At 6 mos. old we took him to get neutered and when we picked him up and put him in the truck, he sat on my lap and just stared out the window, he would not even respond when we called his name. That is the most upset I have ever seen Tucker. He is always such a happy, go lucky little guy. I felt as if I some how abused my puppy, even tho I know it is for his own good. He quickly got over being mad at us and was back to his old self. Tucker is one of the smartest dogs that I have ever owned. He brings us his toys(which he knows by name)all of the time so that we can either play tug of war or just throw them so he can run to get them and bring them back to us. When he brings them back to us he always has to jump in our lap. I think that his little legs have definate springs in them as he bounces all over the place. When he takes off to go and retrieve a toy he tends to leap like a gazelle. I have never seen anything like it!

Our Maltese Coton du Tulear mix loves all people, he thinks humans are the best and all the humans tend to think that he is because of his wonderful personality. He also loves being with his daddy watching football. He even has his own jersey! He gets very excited when we pull it out of the closet on game days. He can't wait to get suited up!!! We love our Tucker and he loves us very much, we wouldn't trade him for anything in the world.

My Maltese Coton du Tulear is a rescue dog. She is 10lbs all white hair is more like a Coton than long and flowing like a Maltese. Has black eyes and nose very affectionate want to be held all the time. Very cute walk-prissy. Will stand on back legs and use the front paws to wipe eyes until you say ok come on lets play and then it is just a little ball of white coming into your lap.

But she lives with a Chocolate Lab rescue and she is the boss and he was there first. It is funny, he loves her and lets her eat first. 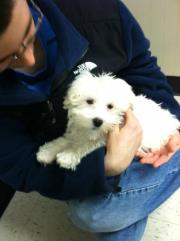 We have a 2 year old Maltese dog named Beau. He was having some separation anxiety issues. The vet and groomer recommended that we get a 2nd dog to accompany Beau. We thought about getting a dog for about six months. We researched several breeds and fell in love with the Coton De Tulear. It seemed like the perfect for Beau. However, they are very hard to find here. My boyfriend works next to a local pet store and discovered that they had some Coton De Tulear puppies one day. However, they seemed very timid and seemed not to have much personality. The next week my boyfriend looked at the store's website and saw that they had two Cotonese puppies for sale. We went right away and the minute I saw these Maltese Cotton puppies I knew he was the puppy for us. He had a fluffy white beard and the most beautiful silky white fur I had ever seen. We played with him until the store was about to close. We did not want to rush into anything so we went home and slept on it. I decided the next day to go and get him. Right when we walked in the store another family was looking at him and I knew we had to act right then. We drove home on a road called Tylersville road and I knew we should name the puppy Ty. He has been the sweetest, calmest and friendly puppy I have ever met. Ty is now four months old and he has never once bitten or chewed on anything but his toys. He does not cry or bark in the middle of the night, so we have to wake him up in the middle of the night to use the bathroom.I have had four puppies in my lifetime and Ty is by far the best behaved. The best news of all is that he and Beau are now best friends. They run around and play together for hours. Ty loves meeting new people and children. I have introduced him to a few family dogs and he has done well with them, but am not going to take him to any parks or training classes until he has all of his shots. I would highly recommend this Maltese mix breed to basically anyone looking for a companion dog! He is such a joy to have as part of our family! 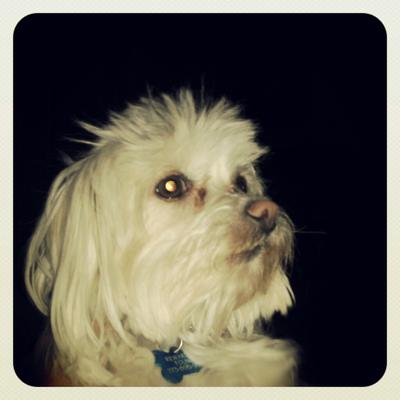 Very bright and intelligent. We think he has us trained. He is energetic but also can just lay in your lap and chill. My Coton De Tulear Maltese cross sleeps with us and you can toss your leg over him, he won't care. Loves to play wrestle, and was surprised that he loves to fetch, but not just anything, only his favorite stuffed bunny. VERY ALERT and likes to sound the alarm. For a little dog he has a deep bark. Very attached to us and affectionate to those he likes, but sometimes some people he just won't warm up to easily and will sneak up and bite their ankles when they turn away from him. Definitely hates people with hats on unless he already knows you. Also a major mamma's boy. When excited he spins in circles and can stand on his back legs for long periods. Lots of character for sure. 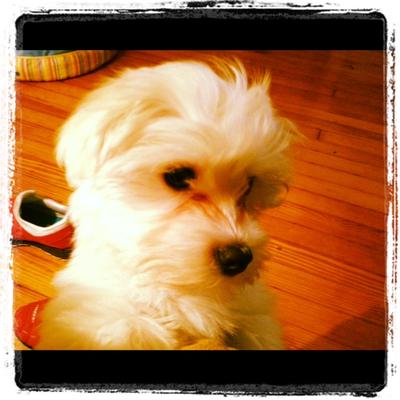 I have only had Woody a month now. His dad, a Coton de Tulear dog, mom a Maltese. He is still a puppy but, already-best dog I have had. I like small breeds and he suits my lifestyle and desires of a dog!

My daughter is terribly allergic to all cats and many dogs. She has had zero negative allergic effects from having him around. (we do also keep him out of her room, for good measure). He is loving, playful and pretty smart so far. House training is about 50/50 still but his crate training is going very well.My teenage daughter and I love him to pieces. He suits our family and is wonderfully adorable company. He is soft and I comb him daily. He loves 'showers' over a bath.

My Maltese Coton de Tulear mix has separation anxiety that ebbs and flows. He is very curious and would love nothing more to dig, dig, dig. Diverting his attention when chewing/play biting to felt toys and goat hooves seem to satisfy him. Walks are generally enjoyable for him.