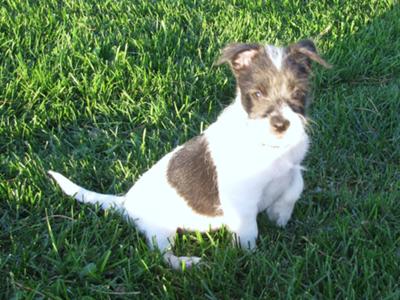 Jasper is a Maltese Papillon mix. He's only 10 weeks old and is already proving to be the smartest Papitese puppies I've ever had. From the moment he came home he's brought laughter, happiness and love to my entire family.

The only accident he's had from the moment he came home has been when his human owners weren't listening-it is as if he house trained himself. He found and taught himself to use the doggie door. He immediately walked into his crate and went to sleep. Personally I would love if he would sleep with me, but he's more comfortable sleeping in his crate.

He loves to chase a ball, so by day one he had fetch and drop down to an art. Yesterday we had two 5 minute training sessions on sit, today it's mastered. Collars, harnesses and leashes are torment for him he'll make you think he's a beaten a dog when any of them come near him, but otherwise literally it's been no effort to train him thus far. He's so smart I'm certain if for one moment I fail to let him know who's the leader around here, he'll be running the show.

If you're looking for a smart bred that will also be able to be somewhat a lap dog I would highly recommend a Papitese puppy. He loves everyone and everyone loves him, but no one more than me. 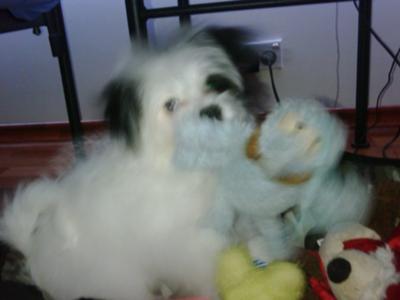 Spike is the first dog I have ever had & I am totally in love with him! Our Papitese puppy has so much personality and character and I just love watching him, he has the cutest face and expressions! My partner works nights and Spike is the best companion, always by my side and follows me whenever I leave the room, even if he is tired and fast asleep, this also means he follows me into the toilet - no privacy with this puppy!

Spike was toilet trained pretty fast and we have taught him to sit and to go get his toys but no luck yet teaching him to come, grr!! He thinks everything is a game and darts away when you try getting him to "come" but we will get there!

Spike loves walks and we take him for big hour plus walks and just saying "walk" makes him go crazy jumping around in excitement.

I have never liked small dogs but fell in love when we saw him at the pet store and now I cant imagine not having him, I highly recommend Papitese puppies for anyone who wants a dog that is loving and playful and a faithful companion. 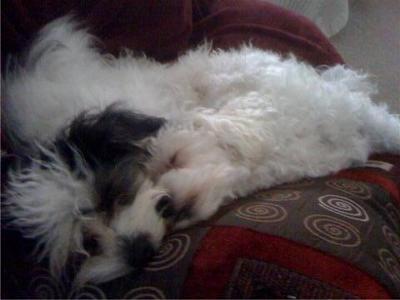 Snoopy is almost 8 months old. He is black and white, with brown in his ears. He is one of a litter of 6 Papitese puppies. His personality is one I have never seen before. His brother Waffles has been staying with us pretty much since birth, lol.

His dominance is amazing. When it comes to Mommy "me", my Papitese lets you know he does not share. I was laying on the couch one night watching t.v. and as usual Snoopy and Waffles were playing. Waffles jumped up on the couch he wanted to be hugged, well Snoopy just about freaked out and jumped on top of him. When I tried to knock Waffles off the couch, I hit Snoopy by accident. He stopped dead in his tracks, cocked his head sideways and just stared at me, then preceded to bark at Waffles and take his seat on my lap.

Every time Waffles tries to get my attention Snoopy will jump up into my arms. I love my Papitese to death. He's my teddy bear. 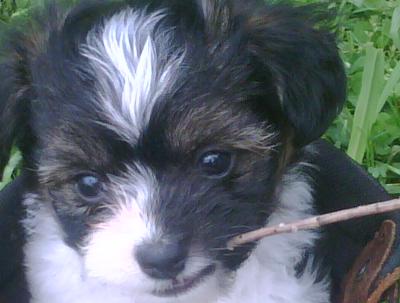 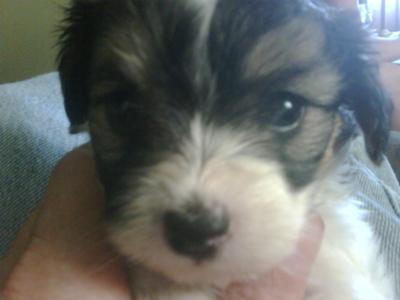 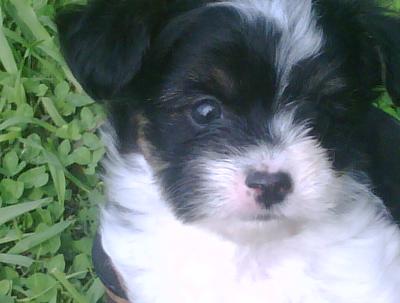 These Papitese puppies are hybrid pups from ACA registered Papillon, Martini and AKC registered Maltese, Daisy. These pups are called "Papitese's". Martini is my son-in-law's Papillon.

Join in and write your own page! It's easy to do. How? Simply click here to return to Tell Us About Your Papitese!.