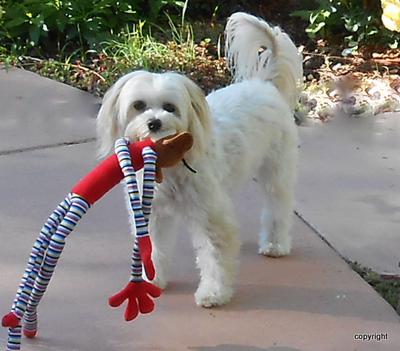 Our sweet "Duffy" is now two years old. He is one smart little dog, always had outside dogs never considered having a dog sleep with me until he came along. He points like a bird dog to whatever he wants at the time be it a treat or going outside or something off the counter. He is playful, loving and actually considers the feeling of both of us. He was easy to train. At night after our dinner he sits with his "monkey toy" patiently waiting and watching while I finish the chores and when I say "Let's go" grabs his monkey and off we go to snuggle and watch a little TV.

When he was a year old and we worked we wanted another Polonese however the female was sold out from under us and we ended up getting a Maltese female as a companion for him. They have a ball together and guess it was meant to be. When "Daisy" doesn't listen to me when called out of the yard. "Duffy" runs out to get her. This he picked up on his own. One bark and a nudge and she follows him back in. Too Funny...