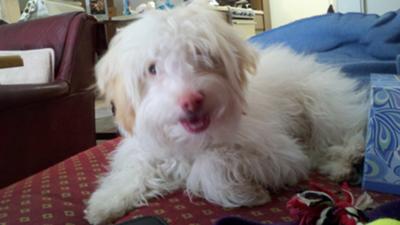 I was looking thru pet finders.com on the chance they might have a small, non-shedding dog in the

Tucson area. I found a real little cutie that is probably a Poodle Maltese mix puppy. He looks all Maltese, but I've been spending my money on getting him healthy instead of genetic testing. Based on his teeth, he is about 5 months old. I know nothing else about his background, except that he was surrendered to animal control in Phoenix and rescued by Az Poodle Rescue. Blood tests were normal. The fee was $200 and included shots and neutering. They told me about his medical problem.

He was having seizures that were poorly managed on phenobarbital, so I've added several Azmira holistic remedies. As he improves, I've been able to cut back the phenobarbital. It made him very lethargic. Feeding him several small meals a day to balance his blood sugar has also helped. He has very definite ideas about what food he likes. He seems to be doing well on Orijen puppy kibbles and rotating flavors of grain free canned food.

I've only had him a week and a half, but he is gaining weight and getting stronger. The seizures are less frequent and less severe. He is running and playing like a normal puppy. He's very sweet, though not a big lap dog. Maybe after he is clipped and cooler. Calling him Sparky.

UPDATE: He's doing very well, by the way. 48 hours since his last seizure. Huge improvement from 1-3 severe seizures a day, even with phenobarb. 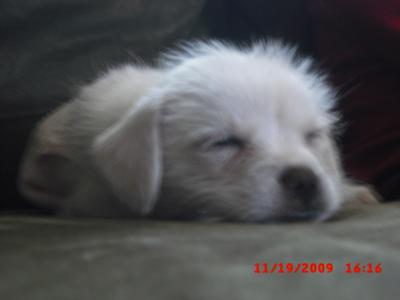 I was looking on Craigslist and I had actually seen an add about a Shih Tzu, that's why I was calling. The lady informed me of the conditions in which she found the 11 month old Shih Tzu (kenneled all its life...) and playing in its own feces.

So she was taking the little girl to a trainer. She then told me of the six week old Maltese and Shih Tzu mix puppies she has rescued. It was all over right there for me. I always thought Maltese dogs were the cutest, and I thought to myself, mixed with a Shih Tzu, she has to be gorgeous. I drove 1 hour and a half from my home in Concord, NC to Lancaster, SC; to get her. It was love at first sight with me and my daughter (2 years old) when we seen her.

Now here we are, we've had her for 3 days now and I am in love with her even more. She goes with us everywhere and even managed to make her way into my bed. Who would of thought you could love an animal this much. She's part of the family and we wouldn't have it any other way.