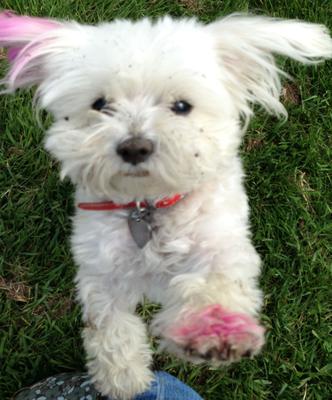 Working in the garden!

My Maltese dog was not the best dog I ever had but for sure the one with the most personality!!! She came to live with me in the summer of 09 when I took early retirement, I got her in AZ. She was fiercely independent from the git go. She would disappear and I would panic only to find she had managed to climb the doggie steps on her own and was safely asleep on the bed! She had a few rows with toilet paper and always in the back yard, she made it snow like no ones business which was fun to send back to my friends in Iowa during their blizzards! She was a rock hound and would bring them in every single day and leave them in the same spot in the hallway.

She did tricks for food and then sometimes to show off. She never played with toys except to steal them from the other pups. She was just a quiet, sweet, bully! She reminded me of me. I shall never know another dog like her and that's a good thing I think. She died Aug 28th when someone let her out of our yard and a gal tried to catch her and scared her to death (The lady said she nipped at me, which she never did-we knew then how afraid she had to be.)and she ran down the street and was run over, it was three days before we found her.

I am sooooo thankful to have her back even dead... I did not do well with the not knowing!! I try to just remember her for who she was and not how she died. In her own way, she was the best dog I ever had or will ever have and I loved her dearly, she really was my little buddy. I could go on and on about how she entertained me she was quite fun. I love her, I miss her and I know she had a good life. She was never for one day sick, in trouble, she just was super special and I would give anything I have to get her back. She was the first Maltese I ever had and will NOT be my last!