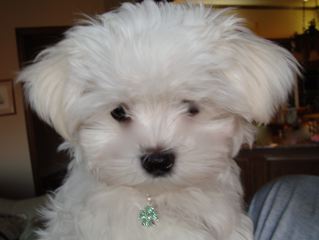 Three and a half month old Riley "FitzGerald" looks good in green because his entire history is Irish tried and true!

Both his parents hail from the old country - Dad's people from county Cork and Mom's from county Down. Even Dad's education is Green. Four years at the University of Notre Dame, 1968-72, and his brother is there as a Junior now. Why, both his sisters even went to St. Mary's College and while there, one of them married another Notre Dame man! The other sister is married to a "Craig" from Boston with countless relatives settled in and around there from Northern Ireland - Riley loves listening to his Grandfather's Irish brogue!

So... with so much "green" tradition" and genetics going for him, surely its an undeniable fact that our little Riley's blood is as green as the beautiful country of good old Eire itself!