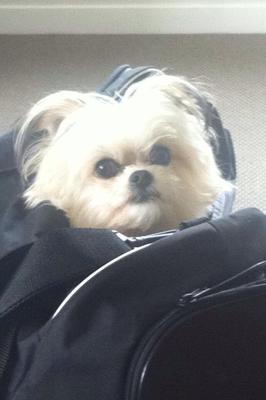 This is my wee man Oscar, he weighs 4.5 - 5 pounds. So I guess he can be considered a teacup tiny toy Maltese.

This photo is Oscar sitting in my gym bag... He always does this a d gets in the bag himself, as he hates to get left behind!

He is nearly 2 years old, and in excellent health.

He is very friendly, yet very protective of his house and owners - if someone comes to the house and does not say hello to him he gets very upset and will tell them how upset he is (bark) until they apologise and give him a pat and/or a cuddle.

I've even once had to tell the cable guy to stop what he was doing for a minute and pat Oscar or he wouldn't get left alone!

But he's very loving, loves people, and will become best friends with visitors to the house and will cry when they are gone. He's very licky, especially first thing in the morning.

Oscar is a bit picky/lazy with treats and food... Anything too hard to chew is not touched... He likes delicious soft foods and treats!

I leave his food out and he grazes throughout the day!

Once when I got him new food the pet store told me to mix it half and half with his old food to get him used to it. (I had heard of this trick before too).. I did this, and mixed the old brand food with the new food.. I then got home after being out for a few hours and there were pallets of his new food strewn throughout the kitchen. He wasn't buying the half n half trick! He would only eat the food he was used to! Cheeky, but smart!

He is reasonably well trained and will go to the toilet outside or on a litter tray filled with newspaper in the laundry. He does have the occasional accident though, like many small dogs tend to, and he seems to like to wee where humans do (in the bathroom).. Naughty!
About once a fortnight I will go into the bathroom and find a small yellow puddle close to the toilet. We try to close the door, but we often forget.
He's never had an accident with number 2's which is great! And he's never gone number 1 on the carpet or anything hard to clean thankfully!

Anyway, that's my Oscar! He's such a sweet boy! 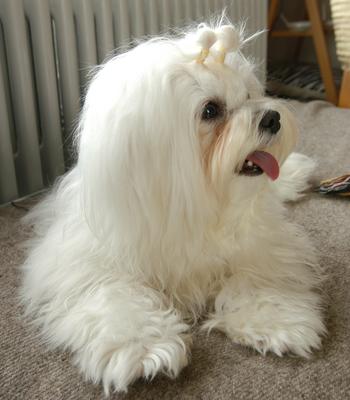 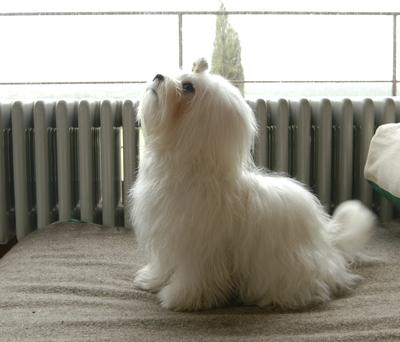 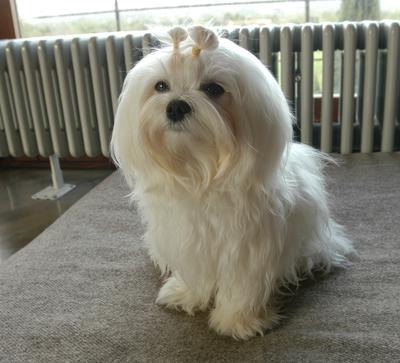 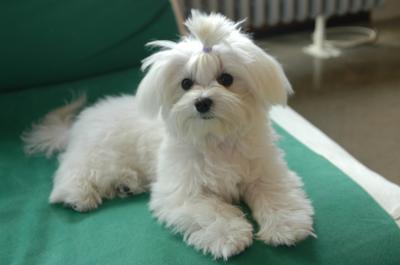 My Maltese toy dog is now eleven months old and weighs four pounds. She is very pretty and healthy. I feed her fresh raw food, she loves rabbit and quail. To make it easy for her I crush the meat and the bones with a knife and mix it with a bit of fruit or vegetables. Until two months ago she did not have any stains from her eyes, but in January she begun tearing. I was so sad cause she is so cute and I thought that she won't have it but she did so I bought Angels Eyes and now, after almost two months the tears are almost gone and the stains in her hair are withening slowly. I am glad that there is such a product, it is sort of painful see your white cute little dog with such stains. I hope that I can quit it after some more time.

I have to say that having my Maltese is one of the most beautiful experiences of my life, I don't exagerate, she is so so cute that everytime that I look at her I feel joy, love, tenderness, gratitude. Now I understand the healing effect that this little dogs provide. I have two other dogs which of course I love very much too but Inga... she is especial, different.

My teacup Maltese is 2.7 lbs. She was born on My 2011. She is very healthy and very playful now, but since she is so tiny it is very important I pay full attention to the dog. It is not possible for her to go up or down the stairs, nor jump off any where so I will have to take extra care of her. But sometimes she will go up and down the porch stairs (since it is smaller and it isn't slippery like home stairs) and make me so happy. It is not easy to give her a walk since Maltese are known to have heart issues. I give her a small walk everyday. Also it is very important I use a harness, not a collar. Choo Choo will usually stay in my arms or in my bag.:) If you are thinking to get a teacup Maltese make sure you are fully committed since they are very delicate.