What Maltese Mix is Shark? 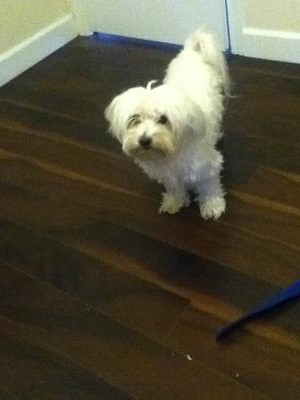 The breeder told us he's Maltese, but Maltese only weigh 4-7 pounds while he weighs 14. I know for sure he is not just a Maltese. He's very attached and hates other dogs and loves all the other animals and people. If a person walked inside and he doesn't even know them he will jump on them and lick them. I swear if someone was coming to rob our house he would be playing with the robber.

His hair grows super fast but we never grow it out. He doesn't sit on our laps either. Friendly with everything but dogs. He very soft white hair and curvy tail. If anyone could tell me wht he is that would be great!