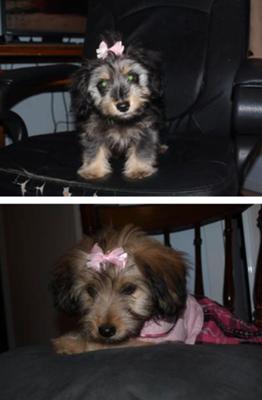 Carrie is the brown pup and Boop is the black/white and tan pup.

They are both adorable little balls of fluff :) 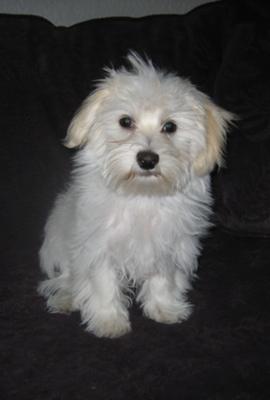 My dog is a Dachshund Maltese mix. He is part toy Maltese and part toy Dachshund @ IT'S FINEST! Fun. Loving. Energetic. Cuddly. Rolls on his back for belly rubs. My Mauxie dog's name is joeY . 8) 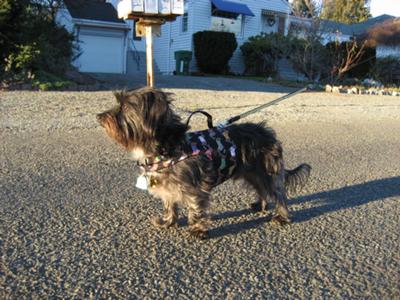 This is Skippy the Dachschund Maltese mix. He is three years old. This is the best dog I have ever owned... calm temperament, great personality.

He is very sensitive and LOVES to be the center of attention. Daily belly rubs are a must with this one!

He has made me in love with the Dachschund Maltese mix and I am currently looking for a little sister or brother for him. 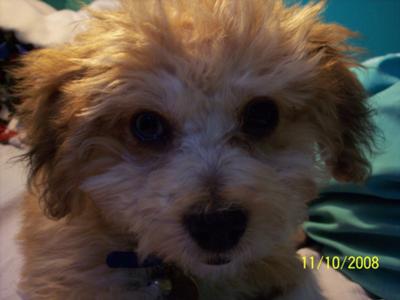 Stewie is our 8 month old Dachschund Maltese mix and is very energetic! He loves to play with other dogs, and is not scared of anything... that is except for inanimate objects. He has one brown eye and one blue eye, which makes him even cuter!

My other dog, Shelby, who is a purebred Maltese, is 10 years old! Stewie and her get along great, even though they have such a huge age difference! Stewie is such a lovable dog and is very easy to please! He plays with almost anything he comes in contact with!

Buying Stewie was the best decision I have ever made! :) 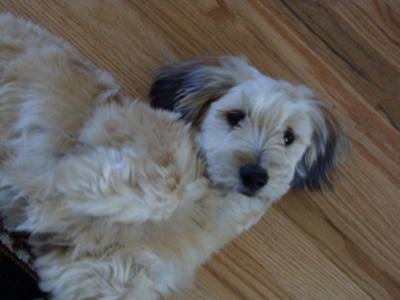 Chloe waiting for a belly rub.

I am hooked on Mauxies. My parents got one while I was in college in 2002, and last summer I finally found one of my own!

Chloe is playful, spunky and a joy to have around the house. She loves to cuddle, has been very easy to train and has quite the personality. She's an "alarm barker," as well, but showers strangers with kisses.

She does not shed and we've had a lot of fun watching her coat change from blacks and dark browns to creams and tans. At 11 months old, she weighs about 10 lbs.

Chloe (as well as my parents' Mauxie) seems to have an affinity towards digging....including couches, potted plants, and the outside garden. That's been our only major complaint. I highly recommend this hybrid breed. 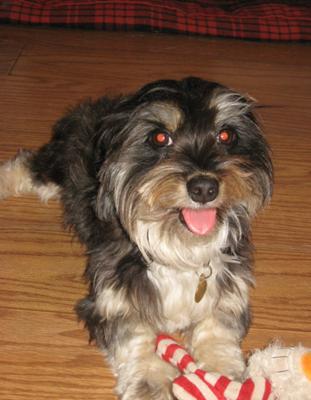 Coda is a 3 year old Dachschund Maltese mix with an amazing personality. Even my mother who hates dogs loves this animal. She's incredibly smart and perky and capable of a broad range of emotions and expressions.

She's a vocal pup and has a watchdog mentality, but luckily listens to me and my wife very well and will quiet down when told to do so. She does have her quirks though, including never eating anything crunchy (she hates dog biscuits), loving to wear little doggy clothes, and having an undeniable superiority complex to every other dog she meets (she gets along with our 4 other dogs just fine but would much rather be with humans than with them). My wife says she acts like a cat, but I think that's mostly because she likes perching on the top of our sofa and won't come to you unless she feels like it. I just like to say she isn't a very "doggy" dog.

I wouldn't recommend her around small children though since she doesn't like being handled roughly and will snap in a panic. But otherwise I'd say she's perfect for just about anyone else. 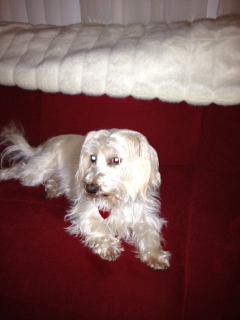 Sammy is the best little Maltese Dachshund rescue dog. He came into our lives as a rescue from the Humane Society in Pasadena, CA.

He is fun, silly, loving and all the things you would want in dog. He has even saved me. I experienced a spasm in my back and couldn't stand up. I told Sammy to go find "Daddy" and he went into the other room and started barking his head off. My husband asked him what was wrong and by Sammy making all this noise it distracted my husband from the kitchen and he was able to hear my cry for help.

My Maltese Dachshund is my best friend. He loves most people and they love him. 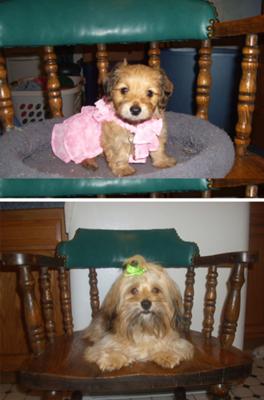 My Mauxie dog Squirt is the best dog I ever had. Her mother was a Maltese and her father was a Miniature long haired Dachshund. She was very easy to house break and she loves to play fetch. She has all the best features of both breeds.

Her hair is very long and soft like a Maltese but it doesn't tangle. My Mauxie dogs hair is a pretty caramel color. She is about 6 pounds and has the Dachshunds short legs.

We had a wonderful little Dachshund Maltese mix female that was a great companion to our male Dachshund Skippy -- he loved her -- always snuggling with her and cleaning her ears.

We had our Dachshund Maltese for less than two years. She was a jumper and loved to fly off of anything she could climb upon. We had to put her down after she contracted IVDD -- that spinal problem that Dachshunds are susceptible to.

It was heart-wrenching to lose her and my 13 year old son is still not over her death.

I highly recommend the Mauxie breed because Moxie's personality was awesome. She was a complete love and had a feisty attitude. God, was she a cutie! Just don't let them jump!!! 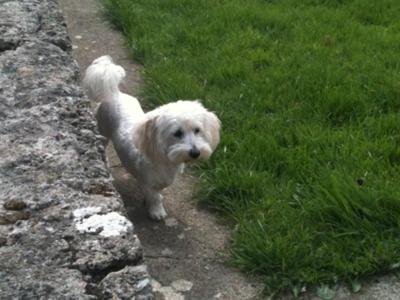 Tia is a one and half year old Dachshund Maltese mix. She looks like Maltese but has Dachshund body. She is a very loving dog. She just had 5 pups from pure breed Dachshund which is black. Her pups are black and cream which are so cute.

Join in and write your own page! It's easy to do. How? Simply click here to return to Tell Us About Your Mauxie!. 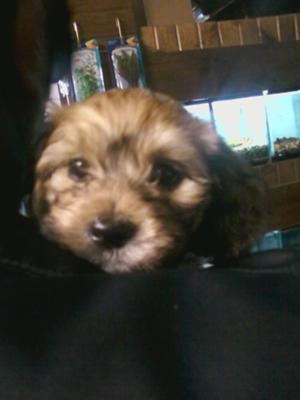 This is Tessa, our Maltese Daschund mix puppy. We actually had no intentions of getting a puppy, but tagged along when our friend went to pick out her Mauxie. As soon as we held her we knew we wanted her. She has now been with us a week and we are already in love with her. She is a little vocal when it is time to put her in her crate, but she is doing good! She loves to play and cuddle and give kisses. She has also become attached to us...following under foot and whining when we are out of her sight. I would recommend a Maltese Daschund mix to anyone who wants a loving companion. 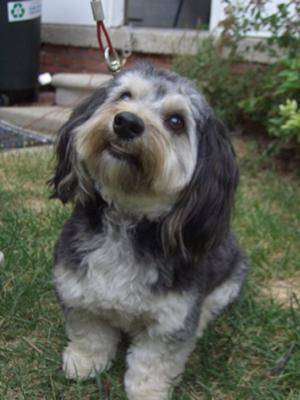 Snickers is the most lovable little Dachschund Maltese mix dog. He was born in June 2007 and has "matured" into a comical, affectionate thief! He has no interest in balls or tug of war, but constantly steals and hides small shiny things (cell phones, CDs, etc.)

I highly recommend this breed. He was easy to train.