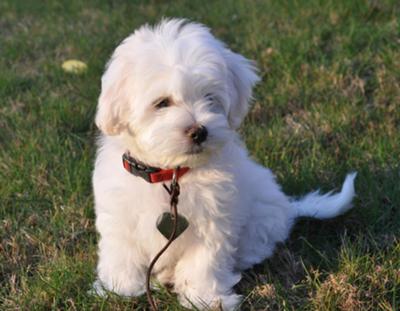 I love Maltese Bichon puppies and this little guy melts everyone's heart. His look with the puppy face is irresistible. His adaptability and social skills are wonderful. And most of all he is very loving.

We got our Maltese Bichon puppy last week when he was 12 weeks old. On his first day with us, we introduced him to a dog park where small size dogs get together. He was nervous because he was separated from his litter and my husband I were still strangers to him.

One week later, we visited the park again. He was a completely different dog. Since he now has a strong bond with us, he feels secure and confident. He acted as if he owned the park. He grabbed any dog's leash and pulled as if he was in charge. His playful body language melted everybody's heart at the park. People exclaimed, "You are so cute." I was concerned that he might think his name is "Cute."

When he sleeps with us, he always wants to feel the contact with us. He puts his nose under our armpit or neck and even sleeps cheek to cheek with us. No doubt that he will be a wonderful companion in our lives.

Questions to Maltichon owners: Will my dog keep the same look without having long ears? I saw some Maltichon with long ears. I wonder whether his ears get longer as he grows. 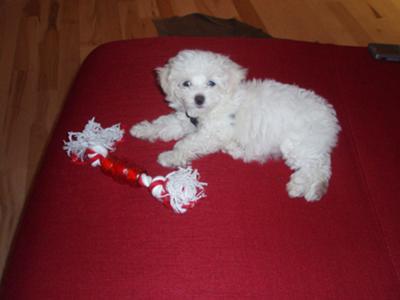 My baby Lily is the best! She is one of the sweetest, most loving little Maltese Bichon puppies. She is so friendly to all kinds of dogs and people. I socialized her from day one and her BFF's are a pug and German short-hair.

She is litter trained and had run of the house since she was about 7 months. Not that she doesn't like to get into things, but I keep the house pretty puppy proof. She is 10months old now and weighs about 8lbs. I groom her myself and like to keep her a little longer.

My Maltese Bichon puppy is hilarious the way she races around and is famous for her kissing. She is completely adorable and such a joy. 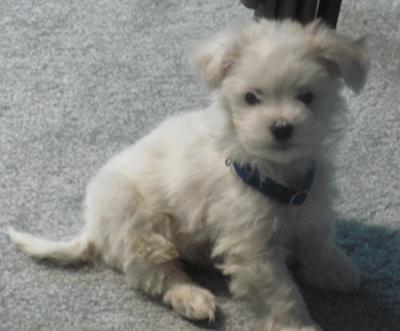 We just adopted one of the most special Maltese Bichon puppies, Bentley, from a friend on 3/21/2010. We were not in the market for a dog at this point in our lives. We have very active kids both in school and in sports. However, the moment we seen him, he won our hearts. He is 10 weeks old and one of the most friendliest, loving and playful dogs we've ever owned. He is also one of my cutest dogs too.

He is great with our kids and all our guests too. Our Maltese Bichon puppy is really smart and has already taken to potty training (I think). We can't take all the credit for that, our friends had already started training him before we adopted him.

We think he's special because his mother developed Preclampsia while pregnant and after delivery was to sick to nurse. He and his four other brothers were bottle fed. Three of them eventually died. He was the runt of the litter but managed to live and become the little guy he is today. 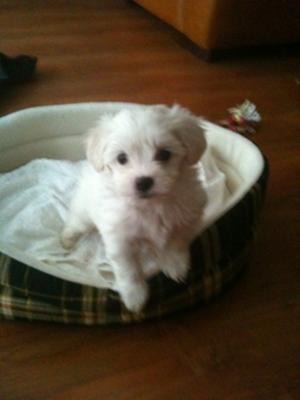 I'm the proud owner of one of the most beautiful little Maltese Bichon puppies called Milly. Milly is a little bundle of fun. She loves when I groom her every evening. Milly is so affectionate she loves cuddles and she was house trained by eight weeks.

If your considering getting a Maltichon I would highly encourage it they are great little dogs that don't shed at all. They like lots of love and attention so are suited to a house where they'll have company most of the time they make great little companions, are great with children and they are very loyal.

Maltese Bichon Frise puppies are also very intelligent and learn commands and tricks fast and love showing off and being rewarded for it. 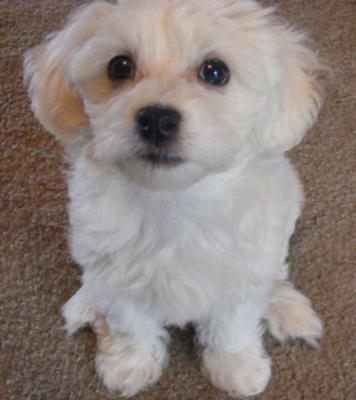 Miko is 11 weeks old and one of the most awesome little Maltese Bichon puppies! He is very outgoing, affectionate, intelligent, playful, cuddly, fearless and feisty. Miko has been easy to train and learned "sit", "stay" and "fetch/drop it" by 8 weeks old.

Our Maltese Bichon loves being outside and playing with other dogs. He seems to love everyone - people and other dogs included. We feel so fortunate to have this amazing little dog in our lives. 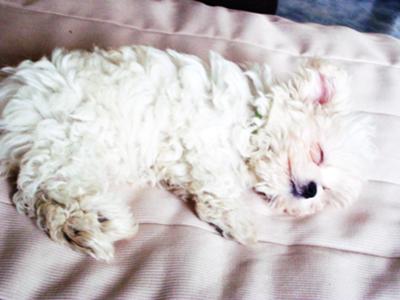 Maddie is 10 weeks old and one of the smartest Maltese Bichon puppies. I've had her about two weeks and she is ALREADY toilet trained and responds to her name. The second day I had her she did a 5km walk and would not be carried at all, then she came to a 3 hour movie with me, and was very quiet, just slept on my lap the whole time (probably from the walk).

She sleeps in the bed next to me at night, and is very very affectionate. She gives little kisses with the end of her nose and even loves to play with our foxy dog and cat, who are both about 4 times bigger than her. She goes to the office with Grandad in the morning and plays with his sandals until she naps.

My Maltese Bichon puppy is very cute, full of energy until she thinks one of the animals will beat her in a play fight. Then she plays dead, which is hilarious to watch! 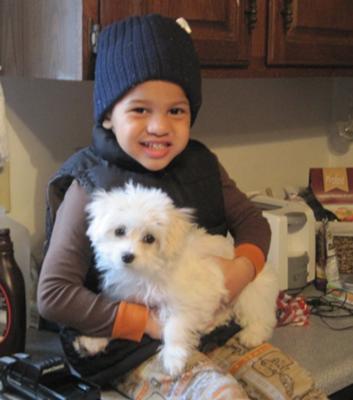 I got one of the cutest Maltese Bichon puppies, my little Simi, from a pet store as I have no children at home, and my cats just aren't the same as a puppy! Simi (Sim-ee) is just beautiful and fun! I'm having some trouble with house training, but I work all day and refuse to crate her for that long. This photo is my Maltese Bichon puppy at about 4 months with my grandson, Xavier, who loves her too! 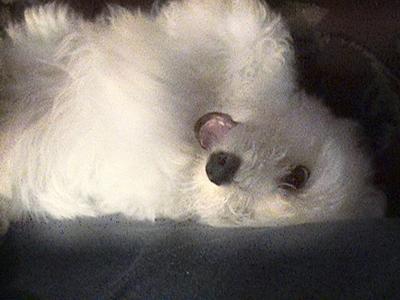 Bentley is one of the smartest Maltese Bichon puppies. He is 13 weeks old and can sit, beg, lay down, roll over, speak, and fetch. He gets very excited and very hyper when people enter the house. He barks when visitors knock on the door or when barking seems appropriate. He is very affectionate towards everyone.

We are having some potty training and chewing issues. But he is only 13 weeks old. Our Maltese Bichon puppy is very curious and loves his squeaky toys. He wishes that our 14 year old cat would play with him. Lucky for Bentley, the cat has no claws. 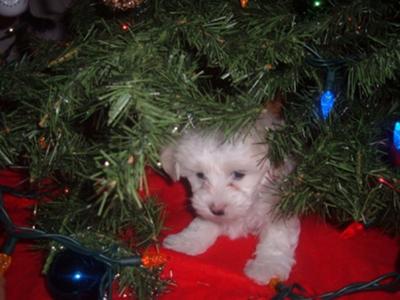 He is 7 weeks old in this picture

Well I got one of the cutest Maltese Bichon puppies when he was approximately 9 weeks old and he is 7 months old now. There is a little sadness to this story. I was supposed to pick him up on a Sunday and then go the nursing home where my mother lived. But, unfortunately my mother died the Thursday evening before (3 days before I was to go and pick up my beautiful Maltichon puppy). So, I ended picking him up the week after, which was right after my mother's funeral (that same day). I did meet him the first day of the wake because I stayed over the owner's house (she is my ex-sister in-law).

Well ever since then he has brought alot of joy in my life. He is now 7 months old today and still brings me so much joy. He knows when I am not feeling well or sad. I am so glad I have him he has helped me heal from my mother's passing away. And, now I have some more troubling time coming, my sister has just been diagnosed with stage 3 ovarian cancer. But, I know he will help me through all this. I chose this particular name Biscuit Sucre because we are french and my mother always loved making sugar cookies (sweet biscuits) and she would have loved this name.

So I want to thank my ex-sister-in-law for introducing to me the most perfect Maltichon.