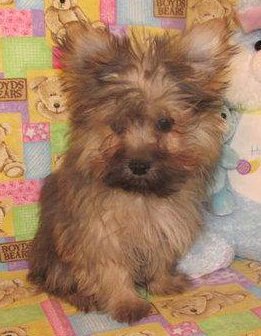 My adorbale Remy when he was about 8 weeks old

My Maltipom puppy is the most loving, playful, friendly and funny dog I have ever come across. Remy is the first puppy I have owned as an adult and even though he is only 5 months and still in training he is getting much better.

He loves to snuggle in bed, and loves everyone and loves to play with all other dogs no matter how big or small they are.

He weighs 6.8 pounds right now and shouldn't get more than 8 pounds if that.

Remy loves to be outside whether it be for walks or playing in the yard or laying in the grass. He also loves to take baths and is very good at letting me comb his hair which does need to be done often to prevent tangles. 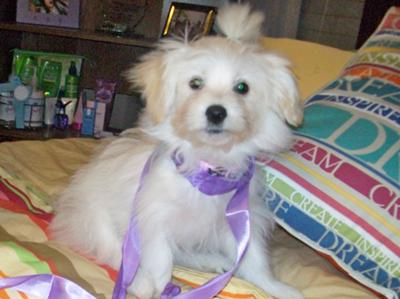 My name's Bella and I'm a 5 month old Maltese Pomeranian mix puppy. I think I may be the sweetest dog on my block (:

I'm very lovable, sweet, and I have a huge personality. I love kids and other animals. My favorite things to do are play with my toys and my best friend Prancie who is a tea cup Pomeranian.

Mom says my only set back is how much I LOVE to rip up paper but other then that I'm the best dog she could ask for. 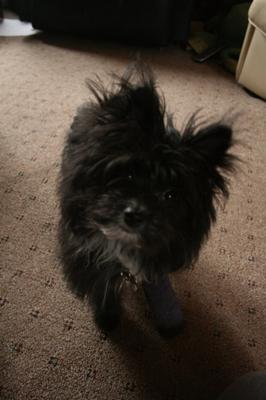 Chewie, soon after he broke his leg!

His favorite activity (thus far) is playing fetch in the yard. He's also proved to be a great watchdog - even if I don't want him to be! He has the highest pitched little bark I have ever heard. He's a beautiful black color with white highlights on his neck, belly, and a little bit on his tush!

When my Maltese Pomeranian mix was 3 and a half months old, he fell down the stairs and broke both bones in his forearm, which made him a little skittish, but overall he's a wonderful dog, and once he gets to know you, he loves you forever!

Return to Tell Us About Your Maltipom!.