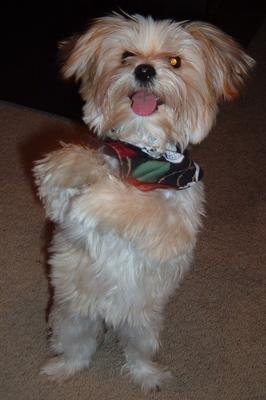 Oliver showing you his dancing skills

Oliver aka Ollie is a Maltese Yorkie mix and has been with us since April. He is almost 8 months old and is such a character! He is very sweet like our full breed Maltese but is curious like the Yorkie. He is always on his hind legs and doing funny things.

He is only 5 pounds but thinks he is 500! Ollie is very smart so we have to keep him busy. He likes to torture his older brother Gabe (Maltese) but I think that is the puppy in him. At the end of the day he loves to cuddle and has been such a wonderful addition to our family! 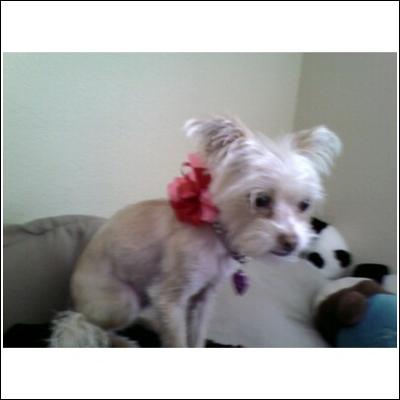 She got pampered for Valentines too

I got my Morkie about a year and 7 months ago. Her original owner passed away. The vet has told us Jackie is about four years old. When we first got her Jackie she only weighed 2 pounds and was very quiet. Now, Jackie weighs 5 pounds and is FULL OF ENERGY!!! She is a princess and is highly active for such a small dog. She does require a lot of attention, but I am not sure if that has to do with us spoiling her.

Every where we go people always stop us and ask us several questions about her. People are always amazed at how high she jumps. At the dog park she runs around like a loose rabbit. She sprints from place to place and jumps in between. Jackie is full of life and energy. Jackie enjoys rough playing with my finance. She LOVES to chew on your fingers and for a small dog she has a strong grip.

Jackie is special because she has endured a lot, her original owner passed away and when we got her you can tell how distressed she was. When I go back home and visit my mother, who lives next door to where Jackie use to live, she gets so excited and can not wait to get off the car. The excitement of seeing her old house brings us to tears because I find it so strange how she remembers. Dogs can grieve too and Jackie has showed us that.

Any time she hears the words "outside" or "treat" she goes crazy. She jumps around and sprints all over the house because she enjoys her daily walks. She enjoys people watching more than anything. I think it's because she enjoys the attention people give her. She is attracted to larger dogs than smaller ones. She enjoys having her hair cut short and we have notice it brings out more energy in her. I love Jackie dearly and could honestly not imagine life without her! 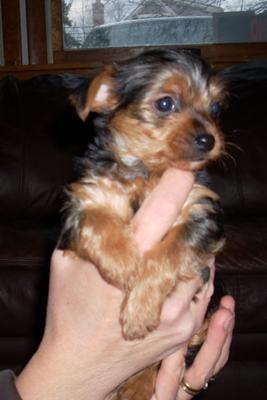 We will be bringing home our Morkie puppy in 9 days! Can hardly wait. I go and visit him weekly and he already seems to know me.

I am uncertain on how I want to train him Puppy pads vs outdoors. We live in New England and is so cold out. Any advice would be most appreciated:
pros vs cons. Thanks. 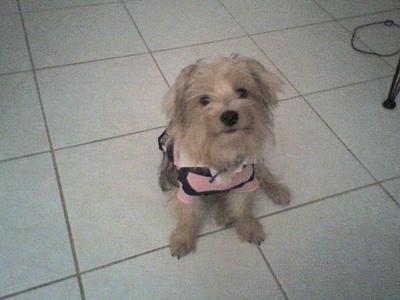 Parker the Maltese mix Yorkie in his rugby shirt!

Parker is a TRIP! He weighs 8lbs, but he swears it's more like 50. On our first trip to our local bark park, we headed to the "small dogs area" but never quite made it! Parker wanted to play rough with the other dogs. He made friends with a beautiful dog which was mixed with a wolf, and his two new best friends were Dalmatian brothers. After a few seconds of sniffing each other out, they spent the next hour running around, play fighting, jumping into the doggy pools & playing fetch with some children that were also in the park.

Parker is such a loving dog. All he ever wants to do is play and give kisses. When I first got him he growled spontaneously, and occasionally barked at my husband. But now he knows everyone, he's a happy boy! He's even patient with my neighbors' children, they're young & tend to treat him like a doll. He just takes it in his stride, & loves them just the same. He's also very smart.

He loves to wear shirts, & play dress up. His favorite is a soccer hoodie I purchased from our local puppy spa. At first I was expecting him to hate it, but he gets sad if you take it off him. He sulks in the corner until I put it back on!

Housebreaking was a little difficult, it took a while, but in the end we got there.

All in all, I am so happy I got a Morkie. They are lovely dogs. I wouldn't trade my baby for the world!!

I have a Morkie 8 mths old she is now. I love her to bits but I'm having a few problems i'm hoping someone may be able to help me with. Toileting = Good somedays as if she's 6 wks old again. Uncontrollable barking at people while on walks or in the car. A slight aggression towards xhildren and men in particular. She also sometimes randomly attacks quite viciously my mums dog.

Please can someone offer any help as I'm scared I may have to give her up ;-(

My Morkie is just the perfect little dog. She is 5 months old and shes is just full of energy. When I get ready for school she always smacks me with her paw. My personal little alarm clock =). I've had many dogs in my life and I think she tops the list. She is small, very smart, easy to train, full of energy, and always fun!

If you're thinking of adopting a Maltese Yorkshire Terrier mix then get one! They are the funnest dogs ever! You won't regret it! =)

My Morkie is protective of his favorite human, his "mommy", and worries when he can't be with her. He is affectionate and sweet, but sometimes gets nervous and growls when he is tired and feels threatened. He tends to shake when he feels anxious, and loves chasing anything alive. He likes to hide when he eats, because he thinks our other dog will steal his food. My Maltese Yorkie mix likes to cuddle with his "mommy", but usually only her. 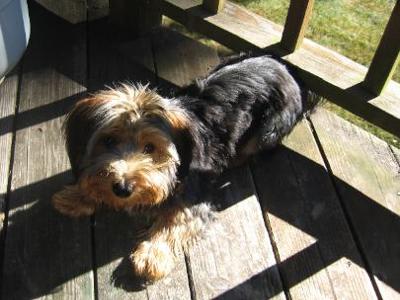 He is big for a Morkie (~12 lbs) but it works out because he thinks that he is the same size as most of our friends dogs which are much larger than him.

This combo of dogs are great because we find that when awake he is very energetic likes to play and go for long walks and at the end of the day winds down into a lap dog that likes to cuddle.

I would recommend this type of dog to anyone looking for a "just right" temperament! 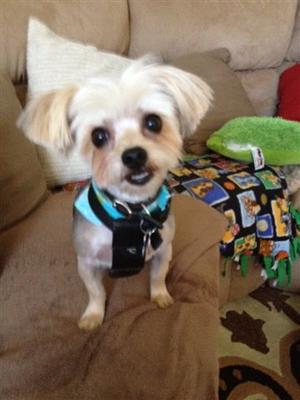 May I introduce... Jinxie Pickles! My Morkie dog is 6 yrs old and is resilient!! He is extremely playful and everyone who meets him falls instantly in love and thinks he is still a puppy. He thinks he is a big dog most of the time and instigates barking with his sister Sprinkles. My Yorkie Maltese mix is full of love and likes to cuddle up but is very independent as well. Jinxie does have trouble aiming on his pee pads but with that face... it is easily forgiven! 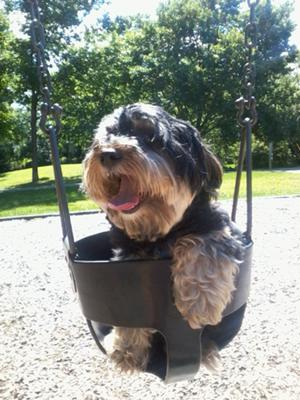 I got my Morkie Patton from my boyfriend's mom who didn't have time to care for him anymore since her sons were all in college and she traveled a lot. He is around 3 years old and 15 pounds. They expected him to be closer to 5 pounds but he just kept growing! I love it because he can still be on my lap (but hates it) but isn't small enough to be fragile. At home he's a very calm dog who is willing to accept attention but doesn't constantly bug you about it. I've heard Morkies bark a lot but he doesn't other than when he hears door bells, knocks, or the animal channel. This dog loves exercise and will walk, and walk, and walk if you let him. If he doesn't get enough exercise, he can get a bit restless and excitable. He is always happy and loves to meet people, usually giving them a smooch on the face. He loves saying hi to children the most. This Morkie is extremely smart (and sneaky) and understands a lot. Most times I talk to him as a regular person and he understands. One example is telling him his bone is on the bed or in the living room when he's sniffing around. He'll look at me then run off and come back with it. They are very smart dogs so don't underestimate them. He is also fairly easy to train (mine rings a bell when he wants to go outside). But there are issues with going potty in the house. He knows he's not supposed to but every once in a while he'll do it. Sometimes it's just random, at other times it's because of the weather(he's afraid of storms so he'll hide and won't come out for the day). Otherwise he's an amazing and adorable dog that I am so happy to have in my life. And he knows it!