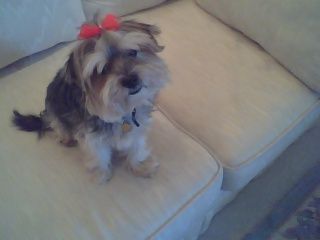 Mindy is a three year old Morkie rescue from a puppy mill. She's been with me since Dec 2009 and is the most lovable dog I've ever met. She's bright and frisky and loves to cuddle. As soon as I sit down to watch TV she's on my lap ready to cuddle.

I suspect that she was mistreated in the past since my Morkie flinches when anyone reaches out to her. She is getting more confident tho and I'm hoping she will continue to become more trusting. She is a treasure. 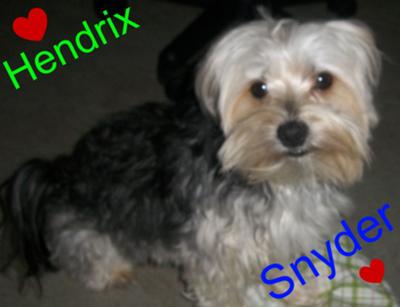 HE is a 2 yr old Morkie rescue and we're in love!!! He is calm, loyal, non barking and just the best dog we could ever dream of. He has been hard to potty train, but he is a rescue so that may explain those issues.

Our Morkie melts your heart and we will never let him leave our family!! My 12 year old daughter had been the one to claim him and he is fine with that, he sits with her during homework, sleeps right with her and just has everything anyone would want in a precious baby.

I have had other toy breeds and this mix of breeds is by far the best dog we've ever ever had. 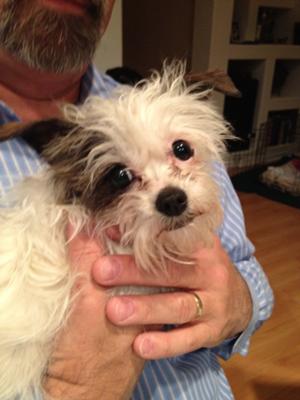 I adopted my Morkie Freddy from the pound. Unbeknownst to me, he was very sick when I brought him home (giarchadia. Unfortunately, he infected my other four dogs. After vet vistis, tests and medicine all the dogs are great. Freddy came home at 5.1 pounds and now tips the scale at 6.5 lbs. He is a great dog in the house and with his playmates. Take him on a walk...watch out... he become ferocious. Not quite sure what to about this, so I walk him a little and then put him in his stroller. He's one lucky dog to have survived the pound.

by Kat Hester
(Wilson OK US)

Well I am so proud to have my Morkie rescue dog & to know what she is. I volunteer at a rescue in our town. I also try & help the dogs at our pound to find homes & get them adopted. I found this little jewel there. She was almost starved and most of her her hair had fallen out. This Morkie dog was scared & in bad shape. I cried when I saw her. The way she looked at me broke my heart, she had given up. I called my vet right then to see about a charity & he said yes bring her in. Thank GOD for him he helps me some like that. She had staph allery from skin stress etc. Got her meds & medicated shampoo. Got her In a foster home for a week then their dog started attacking her. Anyway fell in love with her & gave her a forever home that's been four monthes & she is SPOILED!!!!. I also have a male Bichon I rescued. A Basset/German mix. Also a Lab/Retrevier mix. All rescued from doom. I love them all & stay busy!!! 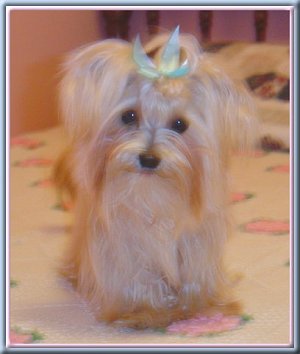 Her hair is mostly white with streaks of light copper and long and silky. She was house trained to little doggie pads in a week.

Angel's breeder had another "accident" a year ago and we now have Bailey and Cricket, the only two Morkie puppies that were born. Bailey is solid white and Cricket is marked like a Yorkie (pictures posted separately). 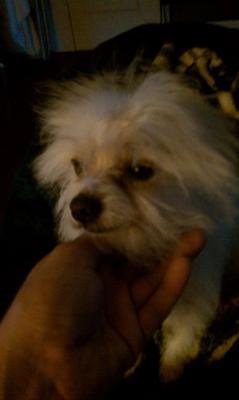 Unbelievable! I adopted my Morkie Casper one week ago today from a shelter. He is nine months old, doesn't bark or whine, and is housetrained already. He is only 5 pounds but has plenty of spirit. It was like I special-ordered this little bundle of joy, who has so many amazing qualities.

I was told he came to the shelter in really bad shape. The shelter had to shave his fur because he came in so matted. Although he has a slight dermititus problem, I'm certain with a good diet, tender loving care, and monthly Advantage treatments, his coat will turn out more beautiful. He is completely white. It's so hard to believe that the previous owner would have neglected this adorable, loving, and cuddly animal.

How could I ask for anything better than a Morkie; two of my favorite breeds in one dog, Maltese and Yorkie. I also have a Malti-poo in my household along with another mixed breed. Casper gets along so well with my other two dogs and appears to smile all the time.

I picked her as a Morkie rescue dog from my mail route. The second time. She was 11 months old. Now a year. She has a lot of energy. She is a 180 pound dog in a 5 pound body. Not scared of anything. Trucks, motorcycles and cars. My Maltese Yorkie plays with my 20 pound cat, they chase each other. But she is hard to house break. I'm not home all day but she will not use the pads. But she tries. My Morkie rescue likes to ride in cars and I have taken her on my motorcycle too she wasn't afraid either, looking around. 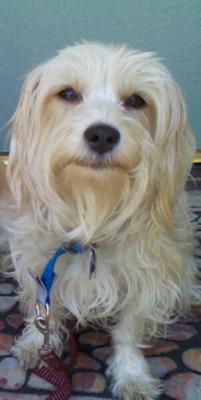 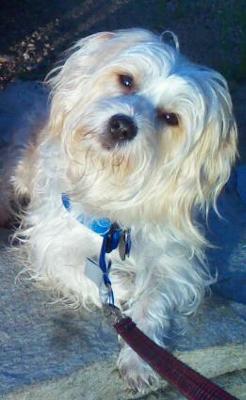 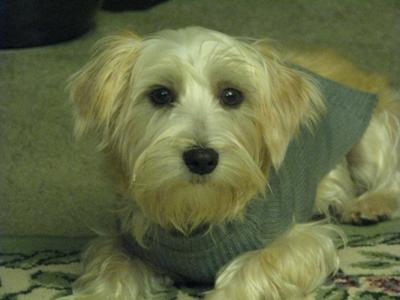 Bentley is a rescue dog I adopted when he was just about one year old. I was told by the rescue that he was a Maltipoo. Yes he has a beautiful blonde colored long coat but there are tiny single strands of black tipped hair on his back and in his tail and his hair is wavy. I have not seen another Maltipoo that looks like him. Finally, to my surprise, just the other day a picture of a Morkie was posted here on Maltesemaniac.com Now I am convinced that my Bentley is also a Morkie not a Maltipoo. What do you think?