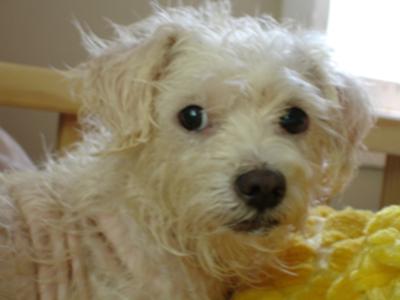 There Is Only Love

My Westie Maltese mix Snowie is my heart. I adopted her from the pound when she was nine months old to be a companion to my aging Miniature Schnauzer mix.

Snowie is beautiful inside and out, and is now nine years old. Her favorite things are Nilla Wafers and cuddling. I have never known a dog to give such unconditional love, or to be so devoted to her family.

Much has changed over the years, including the death of her beloved Sweetie (my little Schnauzer), but she now has five sisters to play with.

I can't imagine my life without my Westie Maltese, as she has become such a sacred part of me. I love her so much.

We purchased our Westie Maltese Jesse when he was 10 weeks old from a pet shop. He was the quiet one. We have had him for only 6 weeks.

We also have a 5 year old Golden Retriever at home (Sam) who is the most domicile dog I have ever seen, so we knew that he would love Jesse. In about 3 days, Jesse was feeling right at home with everyone, including Sam, our golden. It is just a riot to watch Jesse and Sam play!! Jesse is so short and Sam is so tall, but Jesse has so much spunk! He will steal any toy that Sam has in his mouth. They love each other very much, and are both very protective of one another.

We also have an older cat who isn't as interested in Jesse as Sam is, but I am sure that Jesse will find a place in her heart as he has in all of ours! When Jesse isn't chasing Sam, or Zoey the cat, he loves to cuddle and sleep on my (grandma's) shoulder (he technically is my 16 year old daughters dog).

I just love taking them to the local dog park! Our Westie mix gets along with all the other dogs so well! We are still working on walking on a leash, and house training, but he is doing well. He listens very well! He has been a wonderful addition to our family.

Lacey and her cat Mali

Lacey has a perfect mix of each breed's - Westie Maltese - characteristics! She lllooovees to play but will also sit in your lap for hours while you pet her. She minds (honestly!) like an angel.

I get her groomed like a Westie but has the soft hair of a Maltese. She doesn't bark unless she wants another dog to play with her. Everyone tells me she has the best disposition. Last weekend she was in a town parade and had to kiss all the babies. She has a gentle heart and doesn't want you to be upset with her for anything!

She was a breezed to potty train and is a great eater and has been a very healthy low maintenance little girl. Lacey is 1 1/2 years old. Give the girl a bone and a squeaky toy and she is set for a day. She has a huge vocabulary and understands about 20 commands.

She loves to dress up and take baths. She has one Maltese ear (down) and one Westie ear (up)! My sweet little Lacey! I would recommend this mix to anyone who wants a fun loving kind little puppy. 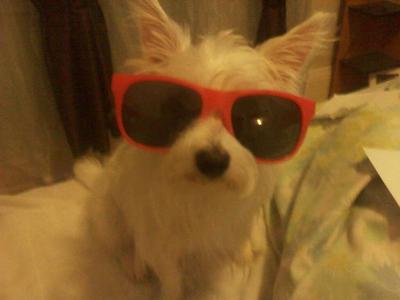 She is the cutest little thing! Our Highland Maltie loves to play. She plays a lot and she very energetic. She is also very protective of me and my family. She was a stray so she tends to try and protect herself as much as she can. I love it when she sees a doggie clothing and she puts her head through it because she loves to wear clothes. I love her soo much and so does my family. 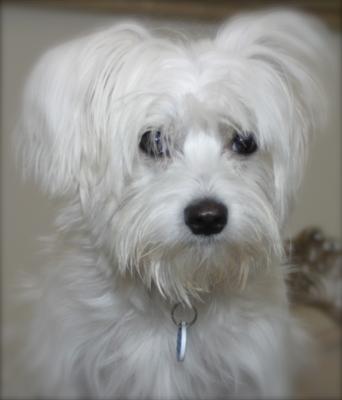 Having had 2 Maltese for 10 years, we lost our dear sweet Bella about 9 months ago. I have produced a video in her memory on Youtube: http://www.youtube.com/watch?v=_UZzoc4elU0

My wife and I decided to purchase a Westie Maltese. Boy were we in for a surprise. If you've seen the movie, "Marley and Me" this little guy ate part of the living room cabinet, part of liner under a chair, the tassels on 2 pillows... I could go on and on. But I won't. Brutus is 7 months old now, and is the most lovable dog we've ever had. He listens intently to what we say, and then goes and does exactly what he wants,

Our Maltese Westie mix is much better now that he's graduated obedience school. #1, out of 2 dogs. Before he goes to sleep, he has to kiss my wife and I, then cuddles up next to her.

What a treasure he is.

I have a 4 year old Westie Maltese mix. He is the best dog in the world. he is so full of love for people and other animals... right now is in love with a cat that lives next door (they actually kiss eachother) he also kisses my other dog Amigo a 2year old yorkie. I wake up every morning with the 2 of them kissing me uncontrollably like its a race to see who can kiss mommy the most before she gets up out of bed. Rodeo also thinks it is his job to take care of Amigo from the 1st day we got amigo Rodeo has never left his side, he cleans amigos eyes ever morning and lays next to him when hes cold, he even told us when amigo had food posioning, Amigo was acting a little sick but rodeo knew there was more to it tha that he would not leave us alone unless we were holding Amigo. So we ended up taking amigo in to the vet and he had food poisioning and dehydration, he really thinks he is amigos mommy. Rodeo is protective of our house & us but would never hurt a fly. He also has a great personality I swear he thinks hes a person! For anyone considering a Westie Maltese mix... definitely go get one! They are the best dogs and sooo cute! I love my 2 boys more than anything in the world!